Eureka Seven was produced by Studio Bones and began its run in the month of April of 2005. The series follows Renton Thurston as he leaves home to go on an adventure and grows in maturity in the process.

One of the most compelling reasons to watch this series in is the themes that are covered and how well they are fleshed out throughout the 50-episode anime. For instance, love is one of the main themes of the series. In fact, it serves as the driving force for Renton to leave home with him following Eureka whom he grew infatuated with. The show follows how these feelings grow from simple infatuation and how it evolves into genuine and mature love. Eureka Seven depicts love as a solution to many, if not all of its problems. It highlights how love serves as the driving force when times are difficult. Beyond that, it emphasizes that love transcends issues of race and culture, of pain and misunderstandings, of war and death.

The anime connects this theme of love to that of family and unity going beyond the traditional idea of family being people related by blood. Gekkostate serves as the series’ family model which is far from perfect even after the numerous developments experienced by the end of the series. Many of the issues that arise in Eureka Seven are internal and occur between members of Gekkostate. The anime explores these issues and depicts how each member or unit of the family copes with the same issue in different ways. Taking the theme of family one step further, the show explores a family formed by circumstance and strengthened by unity and love. The family of Eureka is a reflection of the effects of war with her three children being orphans that she took away from the battlefield prior to the events of the series. We see this family grow in love as each member learns to understand one another and eventually, integrate a new member as a father figure in the family.

While the themes covered by the series do serve as a very good hook, the quality of the other aspects of Eureka Seven does not fall short in comparison.

The soundtrack of the series is well thought of amplifying the mood that is set throughout. The insert song of Denki Groove entitled Niji is particularly impressive capturing the atmosphere of this alternative world. The theme songs used throughout the series were chosen well. Each theme, when introduced, managed to reflect the mood at that point in the series. The openings of Eureka Seven featured Days by FLOW, Shounen Heart by Home Made Kazoku, Taiyou no Mannaka e by BIVATTCHEE, and Sakura by NIRGILS. The closing themes used by the show were Himitsu Kichi by Kozue Takada, Fly Away by Asami Izawa, Tip Taps Tip by Halcali, and Canvas by Coolon. The series also produced an OST album and a collection called Psalms of the Planets: Eureka Seven Complete Best with impressive art as seen below.

Despite the sometimes odd pacing of the story, the character development is paced extremely well for a 50-episode anime. Eureka Seven manages to cover all its characters and bring about a deeper understanding of who they are as people and how they fit in within the odd collection of people that is Gekkostate. While the anime falls under the mecha genre, it utilizes the mecha background as a secondary story line putting its characters first. Although the Nirvash does see a lot of development and receives a large amount of focus throughout the anime, Eureka Seven still managed to put the characters in front, allowing them to develop alongside the unit. Eureka in particular grows quite well as a character having to confront issues that never feel forced. Her development his handled in such a way that the viewer cannot help but sympathize with her and grow more attached to her character. This is exemplified by the fact that Eureka was awarded with Best Female Character in the 2006 Society for the Promotion of Japanese Animation (SPJA) Anime Expo Awards. 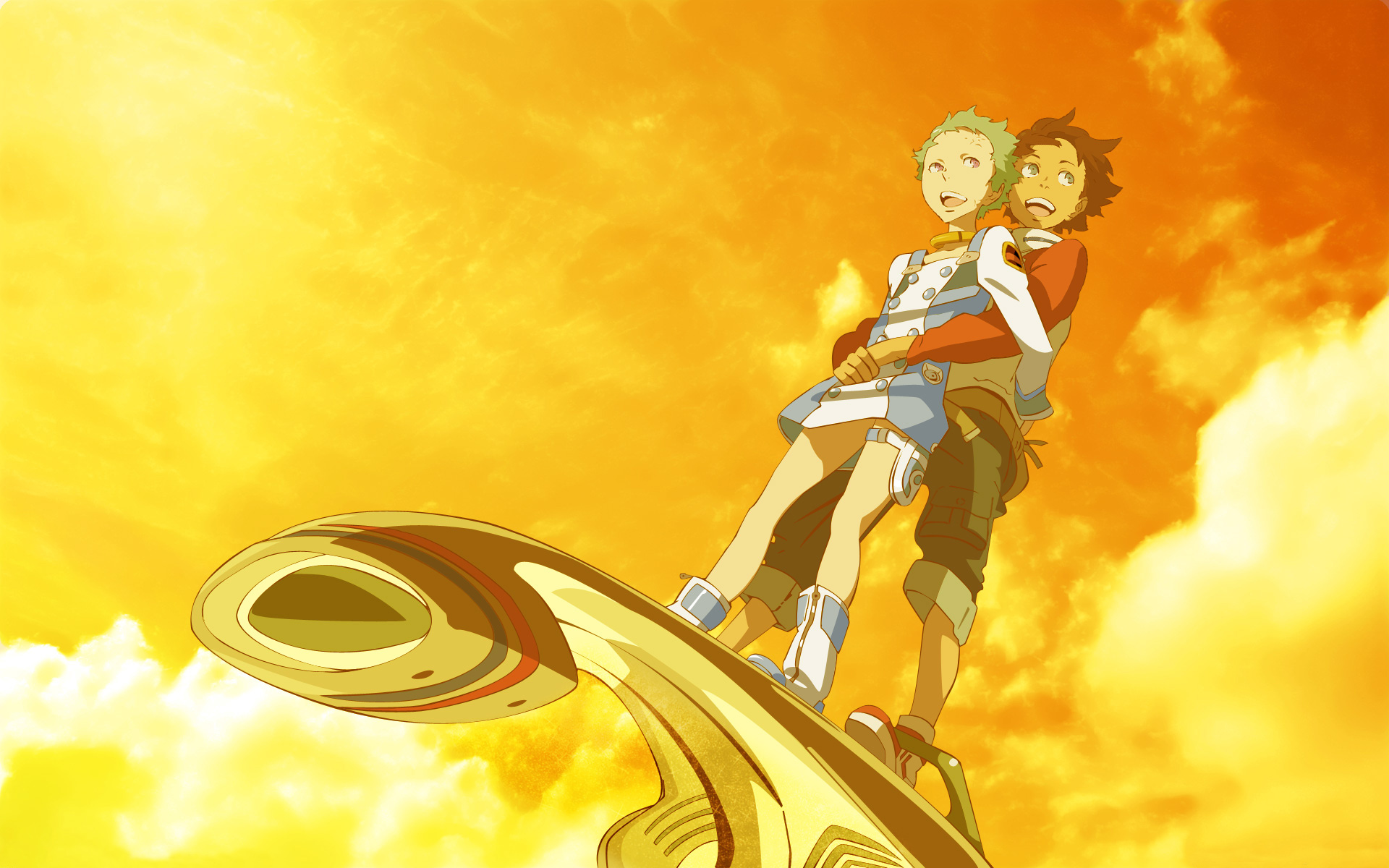 The best character development of the show revolves around the relationship that grows between Renton and Eureka during the course of the anime. The struggles that they face with regards to love and their relationship with one another are depicted in such as way that doesn’t feel overtly cheesy. Eureka’s difficulties with understanding herself and her feelings feel real. Renton’s experiences on the other hand manage to capture the feeling of discovering love for the first time. This translates to the viewer falling in love with the character of Eureka alongside the series protagonist. Somehow, Eureka Seven manages to slowly flesh out their romance while maintaining its sense of genuineness and honesty. The culmination of this carefully constructed relationship is depicted in the touching moment as seen in the photo above.

Overall, the series is an outstanding example of how to handle a long anime and remains a highlight of 2005 anime. While the story does have moments wherein the pacing may be quite slow, Eureka Seven still does a good job of keeping the plot going while allowing room for the characters to evolve.