Byousoku 5 Centimeter, referred to as 5 Centimeters Per Second aired in 2007. It was produced by Comix Wave Films and is another of Makoto Shinkai’s projects. Among Shinkai’s works are Voices from a Distant Star and the recent global success Kimi no na wa.

Like Shinkai’s other works, 5 Centimeters Per Second follows the story of two star crossed lovers. Takaki Tono and Akari Shinohara are classmates who find friendship in one another due to their similar situations in life. Due to both their families being uprooted for work, the two find a connection that leads to a close friendship. When Akari’s family decides to move to another area of Japan for work, the two are forced to go their separate ways. Despite the distance, Takaki and Akari maintain their friendship through the exchange of hand written letters. After some time, Takaki’s family decides to move as well increasing the distance between the two friends. Before Takaki makes the move, he and Akari agree to meet. Eventually, with the increased distance and the passing of time, their connection with one another grows smaller and smaller.

Being one of Shinkai’s earlier works, the weakest point is the character development. The quality development and character growth in Kimi no na wa. was absent in 5 Centimeters Per Second. The film focused primarily on the story of Takaki, one half of the couple that we are meant to follow throughout the film. Because of this, Akari sees little to no character development. Instead, her presence in the film is similar to that of a phantom – present but not physically. We see her character through letters and messages and through Takaki’s fixation on her even later in his life. Outside of this however, we hardly see Akari at all. In contrast, Takaki does see some development as a character. We see him growing up and going through school eventually entering the work force. Throughout his growth however, we feel little connection with his character. The problem with Takaki is that he is a character who is clearly disconnected from the world. His life was shown as a routine that involved avoiding interaction. Even when he was given an entire episode to grow, Takaki only grew in his fixation. The result of all his screen time is a character that is lack luster and ill defined.

While the characters were weak, 5 Centimeters Per Second draws its beauty from the way it conveys its rather simple message. Throughout the story, we are constantly shown one side of the picture. We see how Takaki lives life without ever really moving forward. He is constantly thinking of Akari and despite the absence of communication, he is left wondering about what could have been. By the end of 5 Centimeters Per Second, we finally get to see a glimpse of the other side. It is revealed that Akari is engaged and that she is heading to Tokyo before the wedding. This simple scene shows how the two who were once close dealt with the separation and the distance. While one refused to move forward, the other chose to let go and move on.

Shinkai is also known to use images in nature to deliver a message. The message of the film is perhaps best captured in the metaphor of the falling cherry blossoms. Akari states in the film that cherry blossoms fall at a rate of 5 centimeters per second, a reference to the title of the film. While some may begin next to one another or may originate from the same tree, their journey down to the ground may bring about separation. By the time they land, it is possible that they are far from their origin or from the cherry blossoms that they were once next to. In essence, the image captures the relationship that developed between Takaki and Akari who were once close together. As time passed, their distance grew until eventually, they ended up apart.

Aside from the metaphor, the art is quite amazing. Shinkai truly has a talent for producing amazing landscapes. Throughout the film, we see the landscape change as Takaki moves from an urban area to a rural one. The shift is scenery captures this move wonderfully and allows Shinkai to show his artistic talent. While the art is not as great as what we see in The Garden of Words, it still reflects a character that is distinctly Shinkai. 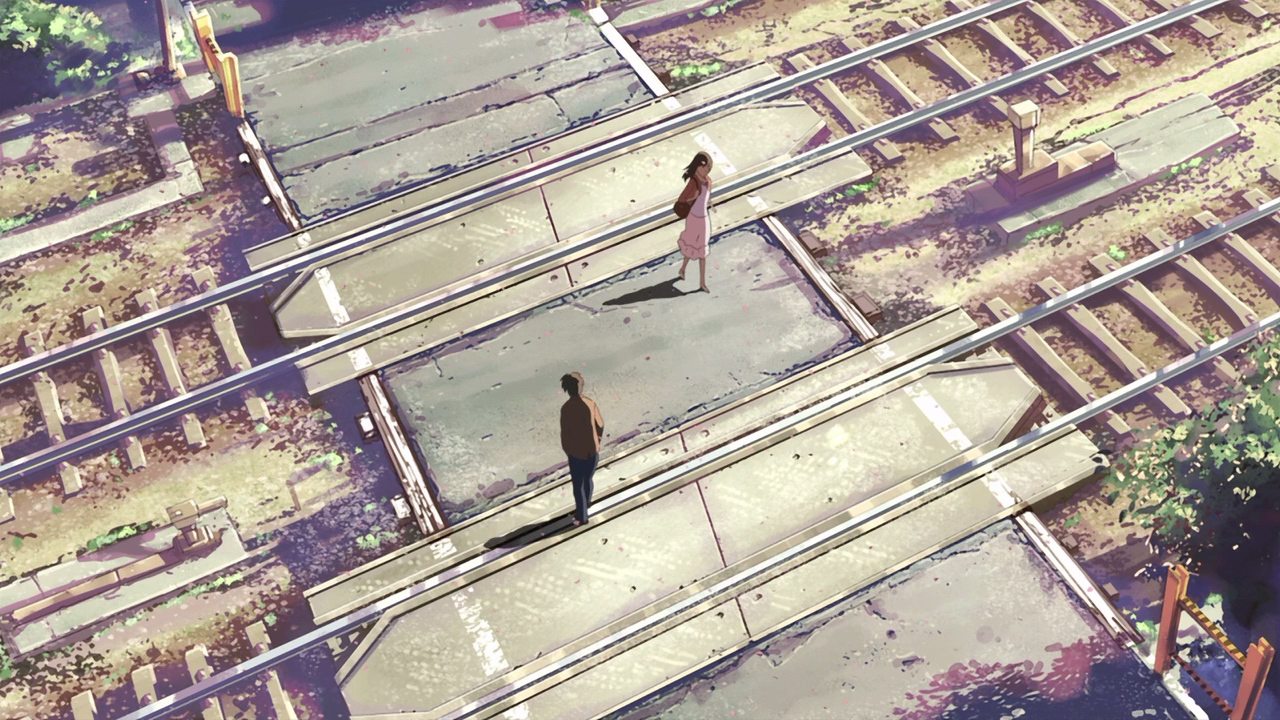 5 Centimeters Per Second is far from perfect but it does quite a few things right. The image of the cherry blossom is as a great illustration and metaphor of the message of the film. Aside from the use of nature, the art is spectacular as well. While the plot and the characters are lacking, it is clear that 5 Centimeters Per Second was a prelude to the successful Kimi no na wa.